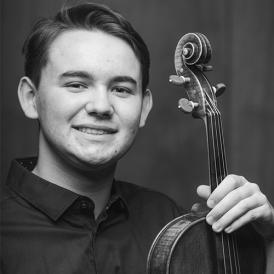 Born in Madrid, Spain, in 2005. Since 2021, he studies at the Reina Sofía School of Music’s Fundación BBVA Viola Chair with professor Diemut Poppen. He has been granted scholarships by AIE-Sociedad de Artistas, Intérpretes y Ejecutantes and Fundación Albéniz. He plays a Jacques Fustier viola, Lyon, 2001, with a baroque bow, loaned as an instrument scholarship by Fundación Albéniz.

He began his studies at the age of 5 at the CEDAM and then entered the Amaniel Professional Music Conservatory, where he studied with Ana Alonso. He has attended masterclasses by Rocío Gómez, A. Pillay, I. Sulliga, Gérard Caussé, W. Kang, A.Suzuki, L. Gaudron, and Tabea Zimmermann.

From 2014 to 2018 he was part of the Albatros Quartet, under the guidance of professor Sergio Castro, attending classes with Alain Meunier, Nicolás Chumachenco (in Pirineos Clasic) and Aitor Hevia. As a member of the Quartet, he obtained the first prize at the 9th Young Musicians Chamber Music Competition in Ávila (2018).

He was part of the JORCAM Children Camerata from 2015 to 2019, with whom he performed as soloist Telemann’s concert for two violas. He participated in the Talentos project of Madrid’s Symphony Orchestra in 2018 and 2019. He has performed at Madrid’s Auditorio Nacional, Teatro Monumental, Teatro Real, Teatros del Canal, at El Escorial’s Auditorium and at Musikene’s Auditorium in San Sebastian. He was selected by the Concertgebouw Youth Orchestra (2019), as well as by the Verbier Festival Youth Orchestra (2021), with whom he performed as principal viola in the closing concert.

As a student of the School, he has performed with the Freixenet Chamber Orchestra, conducted by Sir András Schiff and Andrés Salado. In 2021 he participated in the 30th anniversary tour of the School with the Freixenet Symphony Orchestra, conducted by Andrés Orozco-Estrada, with whom he performed at Madrid's Teatro Real, at Bratislava's Reduta Hall, at Budapest's Liszt Ferenc Academy and at Vienna's Musikverein. He is currently a member of the Ramales Quartet.