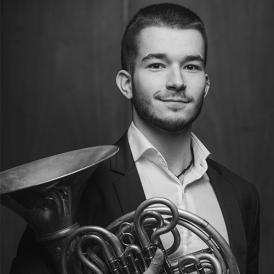 Born in Buñol, Spain, in 2002. Since 2021, he studies at the Reina Sofía School of Music’s Fundación ”la Caixa” Horn Chair with professor Radovan Vlatković. He has been granted a scholarship by Havas Group and Fundación Albéniz. Her Majesty Queen Sofía handed him the Diploma to the most outstanding student of his chair in the 2021-2022 academic year.

He has participated in masterclasses with Lawrence Woudenberg, Juan Manuel Gómez, José Chanzá, Maria Rubio, José Luis Sogorb, José Vicente Castelló, Jesús Sánchez, Bernardo Cifres, and Joan Enric Lluna. He has collaborated in different projects with the Sinfonietta of Bilbao and the Ensemble Praeteritum. Additionally, he has performed in several national and international festivals of youth orchestras such as the Neue Philarmonie München, the Youth Symphony Orchestra of Castellón, and EGO (Youth Orchestra of the Basque Country).

In 2019 he was awarded the absolute prize in the Luis Ayllón soloist competition of Buñol’s La Artística and in 2021 he premiered David Rivas Domínguez’s “De amore et mortis” concerto for soloist horn and band, along with the Music Band of Oviedo.