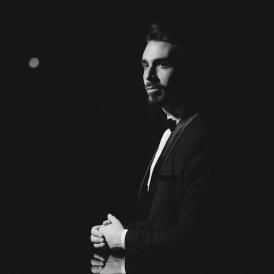 He began his artistic career at the Dnipro Opera with the role of Escamillo in 2014, where he was awarded a theatrical prize for the best opera debut. He broadened his artistic experience at the Zaporizhia Philharmonic and at the Kiev National Opera, and in 2017 he was finalist at the Singing Art Europe Competition in Kiev. Afterwards, he has performed in his home country in operas including Carmen, Pagliacci, Eugene Onegin, Le nozze di Figaro, Cavalleria Rusticana, and The Queen Of Spades.

Since 2017, he lives in Madrid, and as a student of the School, he has attended masterclasses by Ruggiero Raimondi, Teresa Berganza, David Gowland, John Graham-Hall, Iris Vermillion, Stephane Degout, Susan Bullock, Konrad Jarnot, Rosa Domínguez, and during the Santander Music and Academy Encounter by John Graham-Hall.

As a student of the School, he is currently a member of the Fundación Orange Voces Tempo Ensemble.