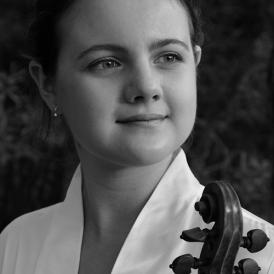 Born in Tarragona, Spain, in 2001. Since 2012 she studies at the Reina Sofía School of Music’s Telefónica Violin Chair with professor Zakhar Bron. She has been granted scholarships by Mariano Puig and Fundación Albéniz.

Her artistic commitments have led her to perform in prestigious concert halls, both in Poland - Krzysztof Penderecki European Music Centre, Filharmonia Podlaska, Filharmonia Krakowia, Spotkania Kultur Auditorium in Lublin and Adam Mickiewicz University in Poznan - and at the Mozarteum in Salzburg (Austria), Sala De Doelen in Rotterdam (Netherlands) and, in Spain, at the National Auditorium in Madrid, Vigo Mar Auditorium, Sony Auditorium and at the auditoriums of Barcelona and San Cugat del Vallés. She has also participated in the Verbier, Schlesswig-Holstein, Interlaken and Wieniawski festivals.

As a student of the School, she has been soloist with the Freixenet Symphony Orchestra conducted by Jaime Martín, and that of the Fundación EDP Camerata, conducted by Giovanni Guzzo and Paul Goodwin. She has also performed within the AIE en Ruta series in Mérida and León. In 2021 she participated in the 30th anniversary tour of the School with the Freixenet Symphony Orchestra, conducted by Andrés Orozco-Estrada, with whom she performed at Madrid's Teatro Real, at Bratislava's Reduta Hall, at Budapest's Liszt Ferenc Academy and at Vienna's Musikverein. She has also been a member of the Art Music and Expresionista duos and is currently part of the KPMG Schubert Ensemble.
She plays an Enrico Rocca violin (1890), loaned by Juan Enrique Carreres, President and General Director of CAGIMA S.L.