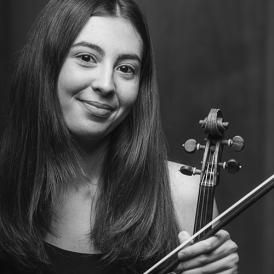 Born in Llíria, Spain, in 2003. Since 2021, she studies at the Reina Sofía School of Music’s Telefónica Violin Chair with professor Christoph Poppen. She has been granted a scholarship by Fundación Albéniz.

Coming from a family with a musical tradition, she started her music studies at an early age, beginning to study the piano and later the violin under the supervision of her parents. She pursued the elementary music degree at the school of the Banda Primitiva de Llíria (Valencia), graduating with the Pare Antoni Award for her outstanding qualifications. She furthered her studies at the Conservatory in the same city with violin professor Ernesto Verdeguer and perfected her technique with Vicente Huerta. She finished her studies with the Extraordinary Prize for Violin Performance, as well as the Extraordinary Prize for Chamber Music.

She was finalist at the Young Performers Competition in Xativa in 2018.

She made her debut as soloist at the age of 13 with the Orchestra of Llíria, with whom she also participated at the 3rd Bankia Competition (2019), performing as concertmaster at Valencia’s Palau de les Arts.

She was selected as principal violin in the Orchestra of the Federation of Musical Societies of the Community of Valencia. In 2020 she participated in the Concertgebouworkest Young, performing at Amsterdam’s Concertgebouw and at Cologne’s Philharmonie under the baton of Daniel Harding.

As a student of the School, in 2021 she participated in the 30th anniversary tour of the School with the Freixenet Symphony Orchestra, conducted by Andrés Orozco-Estrada, with whom she performed at Madrid's Teatro Real, at Bratislava's Reduta Hall, at Budapest's Liszt Ferenc Academy and at Vienna's Musikverein. She is also a member of the BP Mendelssohn Quartet.