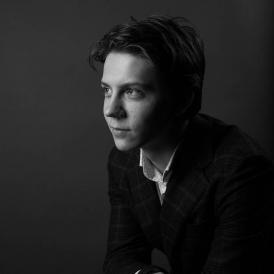 Born in Moscow (Russia) in 1996. Since 2015, he studies at the Reina Sofía School of Music’s Fundación Banco Santander Piano Chair with professor Dmitri Bashkirov. He has been granted tuition and accommodation scholarships by Fundación Albéniz.

He studied at the Gnessin Music Academy with professor Andrey Khitruk. He has attended masterclasses by Jerome Rose, Sigfried Mauser and Josep Colom. He has won several international competitions, including the 5th Rachmaninov Music International Competition in St. Petersburg (2012). Since 2004, he established himself as pianist, clarinettist, organist and composer. He has participated in almost 120 concerts at the Moscow Tchaikovsky Conservatory and the Gnessin and Russian Music Academies as well as in several recitals in Germany, Italy and France. He has performed Rachmaninov’s Concerto no. 2 with the Symphony Orchestra of the Mariinsky Theatre in St. Petersburg. In 2019 he was soloist at the Palacio del Condestable of Pamplona, where he performed within the Pamplona Musical Action programme.

As a student of the School, he has received masterclasses from Alexander Lonquich and has been part of the Sinfonietta, conducted by Zsolt Nagy, as well as that of the Cosan and Schola ensembles and the Casa de la Moneda Scarlatii and Glinka trios. He is currently a member of the Artmusic Duo.