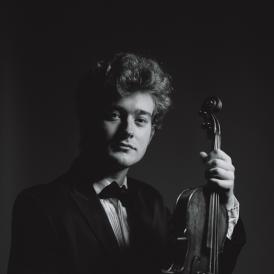 Born in Valencia, Spain, in 1999. Since 2018, he studies at the Reina Sofía School of Music’s Telefónica Violin Chair with professor Zakhar Bron. He has been granted scholarships by Fundación Pachá/Fundación Vertex and Fundación Albéniz.

He was critically acclaimed as “more than a prodigy” after his performance of Mendelssohn’s Concerto, when he was just 14 years old, with the Orchestra of Valencia at the Palau de la Música. He has performed concerts in San Miniato and Siena (Italy), Skive, Thisted, Nykoebing, Thise (Denmark), Geneva (Switzerland), and several Spanish cities. In 2015 he toured around California and in December he registered his first recording for GadGad Music label. In 2017 he performed in Pinggu (China). In addition to recitals accompanied by piano and chamber music concerts, he performed Bach’s Concerto for Two Violins, Bruch’s Concerto in G minor, Tchaikovsky’s Concerto, and Vivaldi’s Four Seasons. He has played under the baton of maestros Cristóbal Soler, Óliver Díaz, John Carewe, Pablo Rus, Ricardo Casero, Sergey Ostrovsky, Beatriz Fernández, Salvador Sebastià, and Daniel Abad, among others.

In March 2019, he was awarded the Performance Prize of Alicante’s Concerts Society and in April he obtained first prize at the 2nd Young Soloists Competition of Valencia’s Youth Orchestra.

As a student of the School, he has been part of the Freixenet Symphony Orchestra, under the baton of Zubin Mehta, Plácido Domingo, Péter Eötvös, Pablo González, Pablo Heras-Casado and David Afkham. He has performed in the Entrenotas series of the ABC Museum, as well as within the World Heritage Cities series in Santiago de Compostela and Úbeda. In 2021 he participated in the 30th anniversary tour of the School with the Freixenet Symphony Orchestra, conducted by Andrés Orozco-Estrada, with whom he performed at Madrid's Teatro Real, at Bratislava's Reduta Hall, at Budapest's Liszt Ferenc Academy and at Vienna's Musikverein. He has also been part of the BBDO Tiempo Quartet and the Sibelius Ensemble. He is currently a member of the Prosegur Albéniz Quartet and Ensemble, with whom he was awarded the Mention to the most outstanding chamber group in the category of string quartets in 2021.