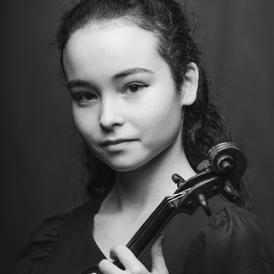 Born in Villanueva de la Cañada, Spain, in 2004. Since 2021, she studies at the Reina Sofía School of Music’s Telefónica Violin Chair with professor Marco Rizzi. She has been granted a scholarship by Fundación Albéniz.

She started her violin studies at the age of 3. She later entered the Majadahonda Music Conservatory (Madrid) with professor Javier Pérez Largacha. From 2016 to 2019 she studied with Sergo Lazarev at the Katarina Gurska Center, and since 2020, she has attended private classes from Sergey Teslya. She combines her violin studies at the conservatory with her piano studies. She has attended masterclasses by Christian Ifrim, Sergio Castro, Ana María Valderrama, Frederieke Saeijs, Helena Poggio (string ensembles) and Sergey Teslya himself.

Since 2016 to 2019 she was a member of the Fundación BBVA-ORCAM Children Camerata, with whom she performed at Madrid’s National Music Auditorium and at Musikene (Guipúzcoa), among other venues. In the summer of 2019, she was a member of Amsterdam’s Royal Concertgebouw Orchestra Young, the Netherlands, and under the baton of Pablo Heras Casado, she also performed at the Concertgebouw and at Brussels’ Flagey Concert Hall in Belgium, among other venues.

As a student of the School, in 2021 she participated in the 30th anniversary tour of the School with the Freixenet Symphony Orchestra, conducted by Andrés Orozco-Estrada, with whom she performed at Madrid's Teatro Real, at Bratislava's Reduta Hall, at Budapest's Liszt Ferenc Academy and at Vienna's Musikverein. She is also a member of the BBDO Contrapunto Quartet.