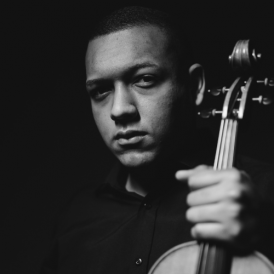 He started his music studies with Wallas Pena at the age of 16. He was a member of the Experimental Orchestra of Repertoire (Brazil). He has attended masterclasses by Claudio Micheletti, Horácio Schaefer, Roger Tapping, Malcom Martineau, Antoine Tamestit, Oliver Wille, Helena Poggio, and Tabea Zimmermann.

As a student of the School, he has been part of the Freixenet Symphony Orchestra, conducted by Pablo Heras-Casado, and that of the Fundación EDP Camerata under the baton of Paul Goodwin and Christoph Poppen, and at the Casa de la Moneda in Madrid. In 2021 he participated in the 30th anniversary tour of the School with the Freixenet Symphony Orchestra, conducted by Andrés Orozco-Estrada, with whom he performed at Madrid's Teatro Real, at Bratislava's Reduta Hall, at Budapest's Liszt Ferenc Academy and at Vienna's Musikverein. He has been part of the Ramales and Contrapunto quartets. He is currently a member of the Granados Quartet.