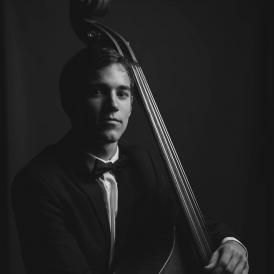 Born in Madrid, Spain, in 1997. Since 2017, he studies at the Reina Sofía School of Music’s Unidad Editorial Double Bass Chair with professor Duncan McTier. He has been granted scholarships by Ayuntamiento de Madrid and Fundación Albéniz.

In 2003 he started his double bass studies with professor Virgil Popa at Arganda del Rey’s School of Music. From 2011 to 2017 he studied at the Federico Moreno Torroba Centre for Music Education with Fernando Anguita, where he graduated with Honours and Extraordinary Prize in Music of the region of Madrid. He has attended several courses, including the Aldebarán of Double Bass and Orchestra with Cristóbal Caballero Aparicio (Sigüenza, 2008 and 2009). He has attended masterclasses by Joaquín Arrabal, Gigel Sobaçhi, Wolfgang Güttler, Massimiliano Rizoli, Janne Saksala, Wies de Boevé, Matthew McDonald, Dorin Marc, and Alain Posch. In addition, he has participated in many projects and seminars such as Project 10, under the baton of Yuri Nasushkin (2015, 2016 and 2017); the Ludwig Streicher Double Bass Workshop Seminar with Ernst Weissensteiner at Madrid’s School of Creative Music (2015); the 4th Edition of the La Via del Concerti in Trento (2015); and the International Youth Festival with Julián Lombana as artistic director (2015); Ensemble Arts Mundi, conducted by Dmitri Yablonsky (2017); and the 6th Edition of the Joaquín Turina International Chamber Music Festival in Seville.

In 2019 he performed with the European Union Youth Orchestra under the baton of Vasily Petrenko and Stéphane Déneve in Muscat (Oman), at Luxembourg’s Grand Auditorium Philharmonie, at Amsterdam’s Het Concertgebouw (Netherlands), in Saarbrücken, at Berlin’s Konzerthaus, and at Hamburg’s Elbphilarmonie (Germany).

As a student of the School, he has been part of the Freixenet Symphony Orchestra under the baton of Jaime Martín, Péter Eötvös, Víctor Pablo Pérez, Andrés Orozco-Estrada and Pablo González; the Sinfonietta, conducted by Baldur Brönnimann, and that of the Fundación EDP Camerata under the baton of Giovanni Guzzo. In 2021 he participated in the 30th anniversary tour of the School with the Freixenet Symphony Orchestra, conducted by Andrés Orozco-Estrada, with whom he performed at Madrid's Teatro Real, at Bratislava's Reduta Hall, at Budapest's Liszt Ferenc Academy and at Vienna's Musikverein.
He has also been a member of the Barroco Ensemble and the Unidad Editorial Dittersdorf Double Bass Quartet. He is currently part of the Unidad Editorial Bottesini Double Bass Quintet.