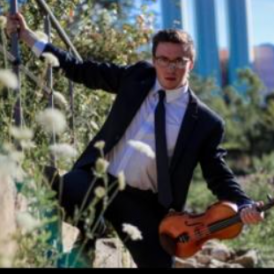 Born in Český Brod (Czech Republic) in 1995. He began playing the violin at the age of five with Eva Bublova and later with Radka Beranova. Josef is now studying in the class of Natalia Prischepenko at the Hochschule für Musik Carl Maria von Weber in Dresden. He has been awarded several prizes in the Richard Bellon Wettbewerb in Sulzbach, TONALi Wettbewerb in Hamburg, Josef Muzika Competiton in Nová Paka, among others. As soloist, he has worked with orchestras including Prague Chamber Philharmonie, North Bohemia Philharmonie, Sinfonietta Dresden and Elbland Philharmonie Sachsen. Josef receives support through the scholarships of Brücke/Most Stiftung and DAAD. For the 2019-2020 season he joined the section of first violins at the Dresdner Philharmonie.