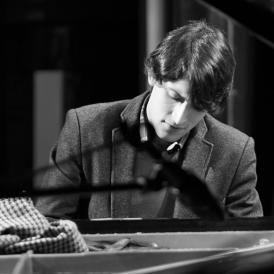 Born in 1989, he started his piano studies in Oviedo at the age of 6 with professor Nariné Karapetyan.
From 2008 to 2013, he studied at the Reina Sofía School of Music’s Piano Chair with professor Galina Eguiazarova, as well as with Marta Gulyás. He has also received advice from Maestro Dmitri Bashkirov.
In 2010 and 2012 Her Majesty Queen Sofía awarded him the Diploma to the most outstanding student of his chair and in 2011 he got the Mention to the most outstanding chamber music ensemble.
From 2013 and 2016 he completed with Honours the Master of Performance and the Artist Diploma at London’s Royal College of Music with professor Dmitri Alexeev. Afterwards, from 2016 to 2018 he continued his training at Vienna’s Universität für Musik und Darstellende Kunst, where he pursued a Graduate Programme of Performance with Lilya Zilberstein.
He currently combines his ample artistic activity with his role as Accompanying Pianist Professor at Nobuko Imai’s Viola Chair and Gustavo Núñez’s Bassoon Chair at the Reina Sofía School of Music in Madrid.
It is worth stressing that he has performed in Spain (Madrid’s National Music Auditorium, Barcelona’s Palau de la Música), United Kingdom (Wigmore Hall), Romania (Bucarest’s Ateneu), China, Moldavia, Ecuador, Jordan, Germany, Switzerland, and Austria.
He has attended masterclasses by professors Zoltan Kocsis, Menahem Pressler, Emanuel Ax, Ferenc Rados, Eldar Nebolsin, and Pavel Gililov, among others.
He has also made several recordings for Radio Nacional de España, Catalunya Música, and Bayerischer Rundfunk.