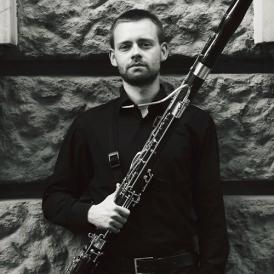 Born in Łódź, Poland, in 1992. He started to play the bassoon with professor Krzysztof Kamiński and Dr. Dorota Cegielska at the Łódź Music Academy. In 2016, he received his Master’s with Honours and became professor at the Stanisław Moniuszko Music School in Łódź (he performed Mozart’s bassoon concert with its orchestra) and, later, at the Music Academy of such city. Additionally, he has worked as a substitute second bassoonist at the Arthur Rubinstein Philharmonic Orchestra. In 2020, he began a Master’s Degree at the Brussels Koninklijk Conservatory with Alain Cremers. He has been awarded in competitions, such as the Duo Competition with harp in Cieszyn, second prize; the Jawor International Chamber Music Competition, second prize; and the 1. Rising Stars Grand Prix 2016, with the chamber ensemble special award.