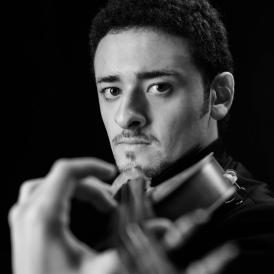 Born in Xaçmaz (Azerbaijan) in 1994. Since 2012, he studies at the Reina Sofía School of Music’s Telefónica Violin Chair with professor Zakhar Bron. He has been granted tuition and accommodation scholarships by Rocío González Raggio. Her Majesty Queen Sofía handed him the Diploma to the most outstanding student of his chair in the 2015-2016 academic year.

At the age of eleven, he started his musical training at the Mstislav Rostropovich School of Music in Baku (Azerbaijan). He has attended masterclasses by Eduard Grach, Mauricio Fuks, Bartosz Bryla, Shmuel Ashkenasi, Menahem Pressler, Natalia Prishepenko, Christoph Poppen, Miriam Fried, Ingolf Turban and Silvia Marcovici, among others.

As a student of the School, he has been part of the Freixenet Symphony Orchestra, conducted by Pablo González, Víctor Pablo Pérez, Josep Pons and Stefan Lano, and that of the Sony Chamber Orchestra, under the baton of Antoni Ros Marbà. He has also been a member of the Amadeus Ensemble and the Asisa Óscar Esplá Quartet, under the guidance of professor Heime Müller, the latter one awarded by Her Majesty Queen Sofía as the most outstanding chamber group in the string quartets category. He is currently part of the Fundación Mahou San Miguel Trio. He plays a Yuri Pochekin violin, loaned as an instrument scholarship by professor Zakhar Bron.