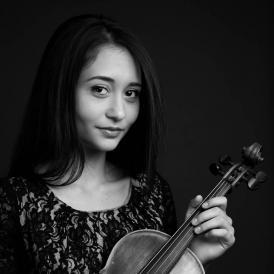 Born in Yerevan, Armenia, in 1996. Since 2016, she studies at the Reina Sofía School of Music’s Fundación BBVA Viola Chair with professor Diemut Poppen. She has been granted scholarships by Goldman Sachs and Fundación Albéniz. In 2019 Her Majesty Queen Sofía handed her the Diploma to the most outstanding student of her chair.

She began her violin studies at the age of seven at the Inspiration Music School in Melbourne (Australia) under the guidance of Vernigora Ludmila. In 2012 she entered the Gnessin State Musical College in Moscow (Russia).

As a student of the School, she has attended masterclasses by Veronika Hagen, Antoine Tamestit, Hariolf Schlichtig, Lawrence Power, Tabea Zimmermann, Ralf Gothóni (groups with piano), and Helena Poggio (string ensembles). She has been a member of the Freixenet Symphony Orchestra, conducted by Antoni Ros Marbà, Pablo Heras-Casado, Plácido Domingo, Andrés Orozco-Estrada, Péter Eötvös and Pablo González; that of the Sinfonietta with Baldur Brönnimann and Johannes Kalitzke and the Fundación EDP Camerata under the baton of Anne-Sophie Mutter. She has also been part of the Fundación Mahou San Miguel, Banco Activo Universal Esferas, Beethoven and Sibelius ensembles, the Dvorák Trio, the Fundación Mutua Madrileña String Consort, and the BBDO Tiempo Quartet. She is currently a member of the Ramales Quartet.