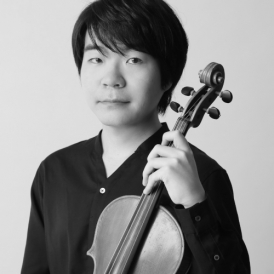 Born in Aichi (Japan) in 1995. Since 2020, he studies at the Reina Sofía School of Music’s Fundación BBVA Viola Chair with professor Nobuko Imai. He has been granted a scholarship by Fundación Albéniz.

He studied at the Toho Gakuen School of Music (Japan) with Ryo Sasaki and, since 2016, at the Curtis Institute of Music (United States) with Roberto Díaz. He has attended masterclasses by Nobuko Imai in Otaru (Japan) and at the Kronberg Academy (Germany). He has also performed with her in recitals as a member of the Viola Quartet.

In 2014 he won the grand prize at the Mozart International Chamber Music Competition in Salzburg (Austria).

As a student of the School, he is currently a member of the Prosegur Albéniz Quartet and Ensemble.