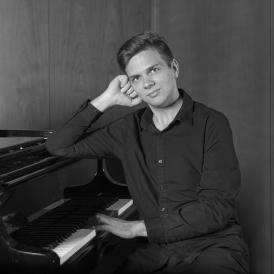 Born in Saint Petersburg, Russia, in 1996. Since 2021, he studies at the Reina Sofía School of Music’s Fundación Banco Santander Piano Chair with professor Milana Chernyavska. He has been granted a scholarship by Fundación Albéniz.

He graduated from Saint Petersburg’s Mussorgsky Faculty of Music in 2016, where he studied with Tatiana Osipova. He then pursued further studies at London’s Royal College of Music with John Byrne and Sofya Gulyak, where he is a Kenneth and Violet Scott Scholar. He has attended masterclasses by Stanislav Ioudenitch, Rena Shereshevskaya, Ralf Gothóni, and Elisabeth Leonskaja, among others.

He was nominated for the Study Award in Recognition of Progress in 2019 and became a Talent Unlimited Trust’s artist in 2020. He has performed in several venues such as the St. Petersburg House of Music Concert Hall (where he first gave a recital as soloist in 2015), Vienna Concert Hall (Austria) and Brussels’ Yehudi Menuhin Hall (Belgium).

He has participated in international music festivals in Russia and other European countries and in several programmes sponsored by State authorities (including Russia’s Ministry of Education).

As a music composer for films he has collaborated with directors such as Alena Mikhailina, Valery Ushakov and Andrew Klementev, and in the writing of scores and the production of soundtracks for the plays ‘While It was Raining’ (directed by Valery Ushakov), which was presented by the SAD theatre (Moscow) and Alena Mikhailina’s musical 'An Eye For a Window', which won the Cannes Corporate Media & TV Award for Best Student Film in 2019. He has also composed soundtracks together with the Saint Petersburg State University of Film and Television.

As a student of the School, he has been part of the Sinfonietta under the baton of Johannes Kalitzke and he has been a member of the Prosegur Albéniz Quartet. He is currently part of of the Deloitte Mozart Trio.