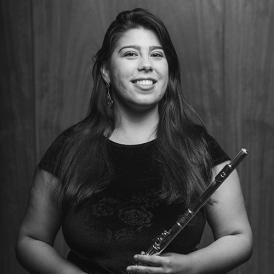 Born in São Paulo, Brazil, in 1997. Since 2021, she studies at the Reina Sofía School of Music’s Flute Chair with professor Jacques Zoon. She has been granted scholarships by MAEC/AECID and Fundación Albéniz.

She began her flute studies in 2004 with a private teacher and in 2005 she joined the São Paulo Tom Jobim State Music School, where she completed her basic musical training. In 2015 she began a degree in flute with Sarah Hornsby at São Paulo State University.

She has attended masterclasses by Joan Enric Lluna. After furthering her training with other flautists of her country and participating in several Brazilian festivals, she is currently a flautist with the Orquesta Experimental de Repertorio.

As a student of the School, she has been part of the Sinfonietta under the baton of Johannes Kalitzke, as well as performed within the World Heritage Cities series in Salamanca. In 2021, she participated in the 30th anniversary tour of the School with the Freixenet Symphony Orchestra, conducted by Andrés Orozco-Estrada, with whom she performed at Madrid's Teatro Real, at Bratislava's Reduta Hall, at Budapest's Liszt Ferenc Academy and at Vienna's Musikverein. She has been a member of the Barroco and Telemann ensembles. She is currently part of the Cosan Quintet.