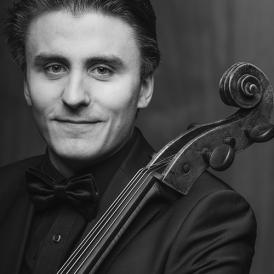 Born in Helsinki, Finland, in 1998. Since 2020, he studies at the Reina Sofía School of Music’s Aline Foriel-Destezet Cello Chair with Professor Ivan Monighetti. He has been granted a scholarship by Fundación Albéniz.

As a student of the School, he has been a member of the Freixenet Symphony Orchestra, conducted by David Afkham, as well as that of the Fundación EDP Camerata under the baton of Giovanni Guzzo. She has performed within the World Heritage Cities series in Santiago de Compostela and Baeza. In 2021 he participated in the 30th anniversary tour of the School with the Freixenet Symphony Orchestra, conducted by Andrés Orozco-Estrada, with whom he performed at Madrid's Teatro Real, at Bratislava's Reduta Hall, at Budapest's Liszt Ferenc Academy and at Vienna's Musikverein. He has been part of the Stoneshield Quartet and is currently a member of the Google Da Vinci Ensemble and the Prosegur Albéniz Quartet and Ensemble, with whom he was awarded the Mention to the most outstanding chamber group in the category of string quartets in 2021. He plays a cello made by Carlo Giuseppe Testore in 1718, loaned by the Finnish Cultural Foundation.