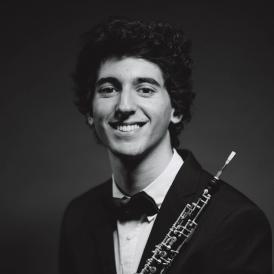 Born in Madrid, Spain, in 2001. Since 2018, he studies at the Reina Sofía School of Music’s Oboe Chair with professor Hansjörg Schellenberger. He has been granted scholarships by Ayuntamiento de Madrid and Fundación Albéniz.

He began his music studies at Majadahonda’s Conservatory with Francisco Torrent. Meanwhile, he has attended classes by Manuel Angulo and Víctor Ánchel in Forum Musikae. He has also attended masterclasses by Jonathan Kelly. In 2011 he performed as soloist with the La Lira de Pozuelo Symphony Band, as well as that of the orchestra of Madrid’s Universidad Politécnica. In 2016 he won Valencia’s International Bands Competition in its Honorary Section. In 2017 he was part of Madrid’s Regional Youth Orchestra.

As a student of the School, he has been a member of the Freixenet Symphony Orchestra, conducted by Pablo González and Pablo Heras-Casado, and that of the Sinfonietta under the baton of Johannes Kalitzke. He has also performed within the World Heritage Cities series in Salamanca. In 2021 he participated in the 30th anniversary tour of the School with the Freixenet Symphony Orchestra, conducted by Andrés Orozco-Estrada, with whom he performed at Madrid's Teatro Real, at Bratislava's Reduta Hall, at Budapest's Liszt Ferenc Academy and at Vienna's Musikverein.
He has also been part of the Bozza Quartet, the EY Ricercata Quintet and the Gounod Ensemble. He is currently a member of the Fundación Mutua Madrileña, and Barroco ensembles, as well as that of the Zéphyros Quintet and Sextet.