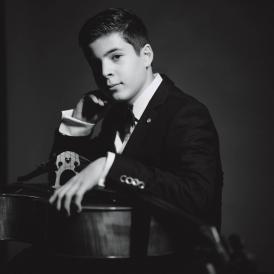 Born in Ponferrada, Spain, in 2005. Since 2018, he studies at the Reina Sofía School of Music’s Aline Foriel-Destezet Cello Chair with professor Ivan Monighetti. He has been granted scholarships by AIE-Sociedad de Artistas, Intérpretes y Ejecutantes, Ayuntamiento de Madrid and Fundación Albéniz.

As a student of the School, he has been a member of the Freixenet Symphony Orchestra, conducted by Pablo González, and that of the Vivaldi Estaciones Ensemble, the Dvořák Quartet, and the KPMG Schubert and the Appassionato trios. He is currently part of the Fundación Mahou San Miguel Trio and the Puertos del Estado Haendel Ensemble.