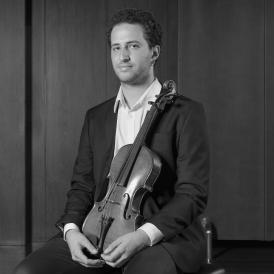 Born in Israel, in 1998. Since 2022, he studies at Reina Sofía School of Music’s Fundación BBVA Viola Chair with professor Nobuko Imai. He has been granted a scholarship by Fundación Albéniz.

He studied music in his home country until graduating with Honours from the Buchmann-Mehta Music School in the University of Tel-Aviv (being awarded first prize in its Chamber Music Competition in 2021) with Lilach Levanon and Ofer Gazit.

He has also participated in the Carl Flesch Akademie Festival and has attended viola masterclasses in Tenerife, 2021.

Throughout his studies, he has been awarded scholarships from America-Israel Cultural Foundation, Ben-Bassat Foundation, Yehoshua and Margrit Lakner Foundation and the Colton Foundation.

As a student of the School, he has been a member of the Freixenet Symphony Orchestra, conducted by Andrés Orozco-Estrada, and is currently a member of the Mendelssohn Quartet.