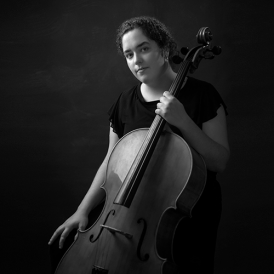 Born in Seville, Spain, in 2004. Since 2020, she studies at the Reina Sofía School of Music’s Aline Foriel-Destezet Cello Chair with professor Jens Peter Maintz. She as been granted scholarships by Fundación Albéniz.

She regularly collaborates with Fundación Avanza, with whom she has produced two recordings.

As a student of the School, in 2021 she participated in the 30th anniversary tour of the School with the Freixenet Symphony Orchestra, conducted by Andrés Orozco-Estrada, with whom she performed at Madrid's Teatro Real, at Bratislava's Reduta Hall, at Budapest's Liszt Ferenc Academy and at Vienna's Musikverein. She has been a member of the Dvořák Quintet and the Ramales Quartet. She is currently part of the BBDO Contrapunto Quartet.