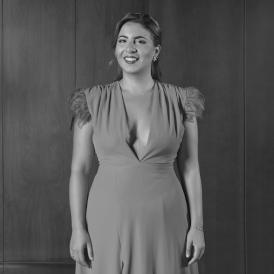 Born in Irún, Spain, in 1996. Since 2022, she studies at the Reina Sofía School of Music’s “Alfredo Kraus” Fundación Areces Voice Chair, with professor Susan Bullock CBE. She has been granted scholarships by Fundación Altamira-Lar and Fundación Albéniz.

She was granted Audience Award at the 8th Medinaceli International Singing Competition, first prize in her speciality at the 9th and 11th Euskadi Young Performers Competition and second prize at the 2017 Intercentros Melómano Competition.

Among her performances, she appeared as Zerlina in Mozart’s Don Giovanni, at the Auditorio Kursaal under the baton of Iker Sánchez. She has also been soloist in Mahler’s 4th Symphony and Rutter’s Magnificat with the EGO Orchestra under the baton of Juan José Ocón.