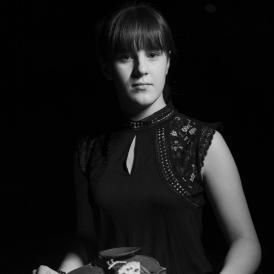 She started her studies at the age of five with Rubén Pérez, Joaquín Torre, and Sergey Teslya, and in 2018 she completed the Professional Music Education. She has attended masterclasses by Isabel Vilà, Nicolás Chumachenco, Ilya Kaler, Sergio Castro, Ingolf Turban, Christoph Poppen, Linus Roth, Asier Polo and, those of groups with piano, by Luis Fernando Pérez and by Ralf Gothóni.

As a student of the School, she has been a member of the Fundación EDP Camerata conducted by Giovanni Guzzo and Paul Goodwin. In 2021 she participated in the 30th anniversary tour of the School with the Freixenet Symphony Orchestra, conducted by Andrés Orozco-Estrada, with whom she performed at Madrid's Teatro Real, at Bratislava's Reduta Hall, at Budapest's Liszt Ferenc Academy and at Vienna's Musikverein. She has been part of the Vivaldi Estaciones and Casa de la Moneda Scarlatti ensembles and the Dvořák Quartet. She is currently a member of the Puertos del Estado Haendel Ensemble.