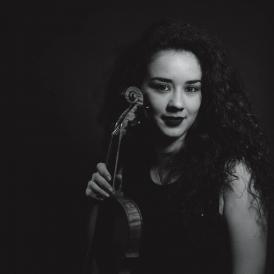 Born in Katerini, Greece, in 1999. Since 2018, she studies at the Reina Sofía School of Music’s Telefónica Violin Chair with professor Zakhar Bron. She has been granted scholarships by Citi and Fundación Albéniz, as well as an instrument scholarship by Yuri Pochekin.

She completed her music studies at Thessaloniki's New Conservatory with professor Igor Selalmazidis and with the highest qualifications. She has attended masterclasses by Miriam Fried, Alexander Lonquich, Ingolf Turban, Silvia Marcovici, Giovanni Guzzo, Christoph Poppen, Linus Roth, Ralf Góthoni (groups with piano) and Oliver Wille (string ensembles). She made her debut at the Young Soloists from Greece and Russia Concert Series, organised by the Vladimir Spivakov institution. In 2014 she performed as soloist at the Musikverein with the International Youth Chamber Orchestra, under the baton of maestro Yuri Bashmet. In 2015 she was concertmaster of the Megarón Youth Symphony Orchestra. In 2017 she performed as soloist with the State Symphony Orchestra of Thessaloniki under the baton of maestro Michalis Economou. In 2017 she was second violin of the Greek-Turkish Youth Orchestra and since then, she is also a member of the Greek Youth Symphony Orchestra.

As a student of the School, she has performed with the Freixenet Symphony Orchestra, conducted by Víctor Pablo Pérez, Plácido Domingo, Péter Eötvös, Andrés Orozco-Estrada, Pablo González, Pablo Heras-Casado and David Afkham; with the Sinfonietta, conducted by Johannes Kalitzke, as well as with the Fundación EDP Camerata under the baton of Giovanni Guzzo and Paul Goodwin. In 2021 she participated in the 30th anniversary tour of the School with the Freixenet Symphony Orchestra, conducted by Andrés Orozco-Estrada, with whom she performed at Madrid's Teatro Real, at Bratislava's Reduta Hall, at Budapest's Liszt Ferenc Academy and at Vienna's Musikverein. She has also been part of the Aegea, Vivaldi Estaciones, Beethoven and Bain Satie ensembles, as well as that of the KPMG Schubert Trio. She is currently a member of the Schola Trio.