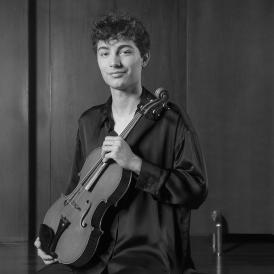 Born in Zamora, Spain, in 1999. Since 2022, he studies at the Reina Sofía School of Music’s Fundación BBVA Viola Chair with professor Diemut Poppen. He has been granted a scholarship by Fundación Albéniz.

He began his viola studies at the age of seven with Raquel Llorente at the Professional Music Conservatory in Zamora and furthered them with Juan José Aguado. He graduated with Honours and, in 2018, he was awarded the Extraordinary Prize of Castilla y León. He graduated from the Royal Music Conservatory in Madrid under D.Thuan do Minh, specialising in String Quartet and Chamber Music with Beatriz Blanco, Carole Petitdemange and Helena Poggio.

He has performed at the Madrid National Auditorium, Teatros del Canal, Museo del Prado, San Fernando’s Real Academia de Bellas Artes, Valladolid Miguel Delibes Auditorium and the A Coruña Palacio de la Ópera. In chamber music he was awarded first prize at the Jesús de Monasterio Competition, in 2019 as part of the Munch Quartet and in 2021, with the Amaltea Quartet, with whom he was also granted the Riberira Sacra Festival Audience Award. He has also played with the Region of Madrid Youth Orchestra, Galicia Youth Symphony (SonFuturo), Canarias Youth Orchestra, Ensemble Ars Mundi, “Proyecto10” Orchestra and Zamora Symphony Youth Orchestra, with whom he has performed as soloist.

As a student of the School, he has been a member of the Freixenet Symphony Orchestra, conducted by Andrés Orozco-Estrada, and is currently a member of the Prosegur Albéniz Quartet.