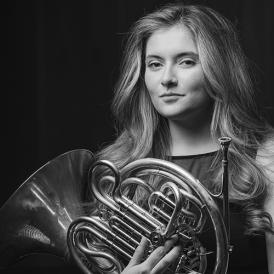 Born in Segovia, Spain, in 2001. Since 2018, she studies at the Reina Sofía School of Music’s Fundación ”la Caixa” Horn Chair with professor Radovan Vlatković, having received the Diploma to the most outstanding student of her chair in 2021. She has been granted scholarships by Fundación Mª Cristina Masaveu Peterson and Fundación Albéniz.

She started her music studies when she was eight years old at the Professional Music Conservatory of Segovia with professor Joaquín Carrasco Gómez and she has attended masterclasses by José Vicente Castelló, among others. She has also participated in encounters with Manuel A. Fernández and Gustavo Castro.

She performed as horn soloist in the Youth Symphony Orchestra of Salamanca, conducted by Álvaro Lozano Gutiérrez. In 2016 she performed as soloist in Museg, former Festival of Segovia. She has played with various orchestras such as the Galician Symphony Orchestra, Castilla y León Symphony Orchestra and Madrid Symphony Orchestra under the baton of Gustavo Dudamel and Pablo Heras-Casado. Since 2020 she has been a member of the National Youth Orchestra of Spain, conducted by Pablo González and James Conlon. In 2021 she was a member of the Luzern Festival Contemporary Orchestra under the baton of Enno Poppe in KKL Luzern (Switzerland) and Berliner Philharmonie (Germany). In 2022 she performed with the European Union Youth Orchestra, conducted by Gianandrea Noseda, Elim Chan, Gustavo Gimeno and Iván Fischer in various cities in Austria and Italy, in Musiikkitalo (Finland), Warsaw Philharmonic (Poland), in the Het Concertgebouw in Amsterdam and in the Konzerthaus in Berlin. In addition, she has participated in the Bolzano Festival with the Mahler Academy under the baton of Marc Minkowski.

As a student of the School, she has been a member of the Freixenet Symphony Orchestra, conducted by Péter Eötvös, Pablo González and Pablo Heras-Casado, with whom she was a soloist, and that of the Sinfonietta, led by Jorge Rotter and Johannes Kalitzke, the Fundación EDP Camerata, conducted by Paul Goodwin, and within World Heritage Cities Chamber Music series (Cáceres). In 2021 she participated in the 30th anniversary tour of the School with the Freixenet Symphony Orchestra, conducted by Andrés Orozco-Estrada, with whom she performed at Madrid's Teatro Real, at Bratislava's Reduta Hall, at Budapest's Liszt Ferenc Academy and at Vienna's Musikverein. She has been part of the Fundación Mutua Madrileña Ensemble and is currently a member of the EY Ricercata Quintet.