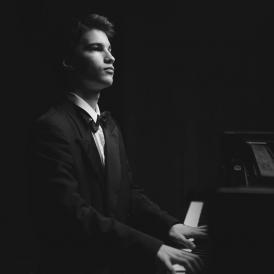 Born in Madrid (Spain) in 1999. Since 2017, he studies at the Reina Sofía School of Music’s Fundación Banco Santander Piano Chair with professor Dmitri Bashkirov. He has been granted scholarships by AIE-Sociedad de Artistas Intérpretes o Ejecutantes de España and Fundación Albéniz.
From 2010 to 2013 he studied at the Teresa Berganza Conservatory with Ruzan Badalian. Meanwhile, he attended classes by Dmitri Bashkirov, Denis Lossev, and Ana Guijarro. In 2016 and 2017 he attended classes by Lilya Zilberstein at Siena’s Accademia Chigiana (Italy) and in 2018 he also attended the summer courses at Vienna’s University of Music and Performing Arts.
In addition, he has attended masterclasses by Joaquín Achúcarro, Jerome Rose, Elisabeth Leonskaja, Eldar Nebolsin, Joaquín Soriano, Stefan Vladar, Nino Kereselidze, Josep Colom, Boris Berman, and Luis Fernando Pérez, among others. He has also been awarded first prize in several competitions such as the Mundi Talent Awards (2018) and the Julio García Casas City of Seville (2016), where he also obtained the Special Prize for the best performance of Chopin’s work.
He has performed Beethoven’s Concertos No. 5 and 3 at Madrid’s National Auditorium, conducted by George Pehlivanian and Ramón Torrelledó, respectively. In 2012 he performed at Berlin’s Arena O2 along with Lang Lang and Herbie Hancock, as well as 50 other children from all over the world. He has also taken part in the Canary Music Festival and in the Teatros del Canal (TEMPOLISZT), and in 2016 he performed Chopin’s Concerto No. 1 at the Closing Ceremony of the Castle Rigone Young Concertists Festival (Italy) with the Trasimeno Chamber Orchestra, conducted by Silvio Bruni. In 2018 he performed at the Auditorium of León and gave a recital in duo with violinist Javier Comesaña at the Reales Alcázares of Seville.
As a student of the School, he has been part of the Enagás Schumann and Deloitte Mozart Ensembles. He is currently a member of the Amati Trio.