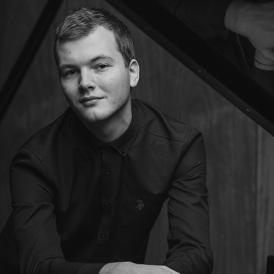 Born in Mariupol, Ukraine, in 2002. He studies at the Reina Sofía School of Music’s Fundación Banco Santander Piano Chair with professor Milana Chernyavska since the 2021-2022 academic year, after having studied with professor Dmitri Bashkirov. He has been granted a scholarship by Fundación Albéniz.

He started playing the piano at the age of six at the Mariupol Art School and, at the age of 11, he entered the Lysenko Music School in Kiev with professor Sergei Riabov. In 2019 he went on to study at the Tchaikovsky Music Academy in Kiev. Moreover, he has attended masterclasses by Ralf Gothóni, Stanislav Ioudenitch, and Rena Shereshevskaya.

He is winner of regional and international competitions, including In The Homeland of Sergey Prokofiev (2011 and 2013), the national soloist competition with orchestra Musical November of Mariupol (2012 and 2013, Ukraine), the International Competition for Young Performers of Crimea (2012), and winner of the diploma at the 2nd International Piano Competition of Kiev (2018).

His first performance with an orchestra was at the age of nine, when he played Johann Sebastian Bach’s concerto in F minor for piano and orchestra. He has also performed in concerts with the National Philharmonic of Ukraine, the Ukrainian Radio Orchestra, and the Tchaikovsky Kiev National Music Academy, among others. Additionally, he has performed at the Prokofiev Museum to celebrate the 120th anniversary of the composer in Krasnoye (Sontsovka).

As a student of the School, he has been part of the Dvořák Quintet and is currently a member of the Appassionato Trio.