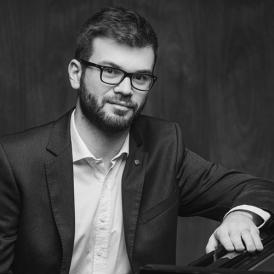 Born in Aix-en-Provence, France, in 1998. Since 2021, he studies at the Reina Sofía School of Music’s Fundación Banco Santander Piano Chair with professor Galina Eguiazarova. He has been granted a scholarship by Fundación Albéniz.

He began to study piano with his father, Michel Bourdoncle, and pursued his education at Paris’ Music Conservatory in 2015 with Roger Muraro and Isabel Dubuis, earning the highest distinctions. He has also benefitted from Nelson Goerner’s valuable lessons at the Geneva University of Music (Switzerland) and since 2013, from those of Bernard d’Ascoli’s as part of the Piano Cantabile training. He has also attended masterclasses by Stanislav Ioudenitch, Rena Shereshevskaya, and Elisabeth Leonskaja.

He has been awarded in competitions such as the Darius Milhaud in Aix-en-Provence (France), Hanoi (Vietnam), and Jaen’s International Piano Competition (Spain).

As a student of the School, he is a member of the Mistral Trio and the Saint-Saëns Ensemble.