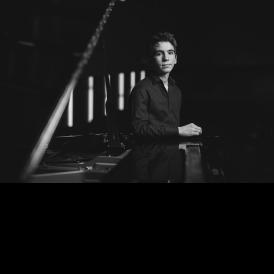 Born in Brisbane, Australia, in 1999. Since 2017, he studied at the Reina Sofía School of Music’s Fundación Banco Santander Piano Chair with professor Dmitri Bashkirov until 2021, and with professor Milana Chernyavska since the 2020-2021 academic year. He has been granted a scholarship by Fundación Albéniz. He received the Diploma to the most outstanding student of his chair in 2019 and 2020. He has also been awarded first prize in his category at the 49th Young Piano Performers Competition of Catalonia in 2019.

He started his piano education at the age of three and he was later advised by Joyce Bennet. In 2011 and 2012 he attended the Yehudi Menuhin School in London, where he studied with Ruth Nye. He has also studied with Anna Grinberg, among others. He offered his first concert at the age of four at the Queensland Conservatorium. He has given recitals in Australia, as well as abroad. In 2010 he played with the Queensland Symphony Orchestra at the Queensland Performing Arts Centre. In 2015 he played Schumann’s piano concerto with Brisbane Pops Orchestra and in 2016 he performed with the Young Conservatorium Symphony Orchestra in the Australian Piano Duo Festival. He has also performed within the AIE Cycle at the Lázaro Galdiano Museum, Sevilla's Cicus Auditorium, and at Cataluña's Hammerklavier Festival.

As a student of the School, he has attended masterclasses by Jerome Rose, Elisabeth Leonskaja, Eldar Nebolsin, Alexander Lonquich, Ralf Gothóni, Stanislav Ioudenitch, and Rena Shereshevskaya. He has performed with the Sinfonietta, conducted by Baldur Brönnimann, as well as within the World Heritage Cities series in Úbeda. He has been part of the Mistral Trio and the Tricorne Ensemble. He is currently a member of the Bain Satie Ensemble and the Telemann Ensemble.