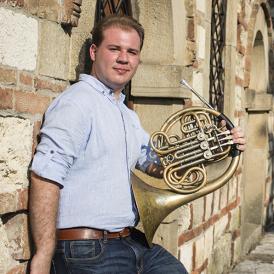 Born in Belgrade, Serbia, in 1998. He studied horn at the Mokranjac School of Music with professor Božur Jovičić and at the Stanković School of Music with Miloš Djordjević. He graduated from Belgrade’s Arts University, in the class of professor Milan Radić, having studied for six months at Birmingham’s Royal Conservatory (United Kingdom), thanks to the Erasmus programme. He has won the Republic of Serbia Competition and the Davorin Jenko International Competition. He was also a member of the ESYO Orchestra. He has participated in courses organised by the Prague Summer Institute and the Crescendo in Hungary, among others, with professors such as Thomas Hauschild, Zdeněk Divoký, László Seeman, Frøydis Ree Wekre, and Jindřich Petráš. He is currently studying a Master’s Degree at the Salzburg Mozarteum with professor Radovan Vlatković.