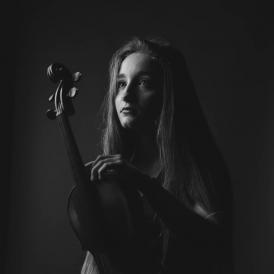 Born in Madrid, Spain, in 1999. Since 2017, she studies at the Reina Sofía School of Music’s Fundación BBVA Viola Chair with professor Diemut Poppen. She has been granted scholarships by Consejería de Educación, Universidades y Ciencia de la Comunidad de Madrid and Fundación Albéniz. She plays a SIELAM baroque viola bow, loaned as an instrument scholarship by Fundación Albéniz. In 2020 she received the Diploma to the most outstanding student of her chair.

She began her viola studies at the age of five with the Suzuki method under the guidance of Carlos Albuisech and María Jesús Cano. She later entered the Federico Moreno Torroba Centre for Music Education, where she studied viola with Cristina Díaz and received an award of End-of-Degree Award. Meanwhile, she studied accordion with professors such as Esteban Algora. She has attended several improvement and summer courses with Tatjana Masurenko, Paul Silverthorne, and Laure Gaudron in the International Ayllón Music Course, Fundación Príncipe de Asturias. and the Villa de Lerma Musical Project. She has been awarded third prize at Madrid’s “La Noche” Festival-Competition. She has also taken part in the Project 10 Orchestra under the baton of Yuri Nasushkin and in the Atlantis Musi-k Project under the direction of Manuel Tévar, among others.

As a student of the School, she has attended masterclasses by Hariolf Schlichtig, Lawrence Power, Tabea Zimmermann, Alexander Lonquich, Antoine Tamestit, Ralf Gothóni (groups with piano) and, during the Santander Encounter of Music and Academy, by Máté Szücs. She has also been a member of the Freixenet Symphony Orchestra, conducted by Jaime Martín, Víctor Pablo Pérez, Plácido Domingo, Péter Eötvös, Andrés Orozco-Estrada, Sir András Schiff, Pablo González and Pablo Heras-Casado; that of the Sinfonietta under the baton of Baldur Brönnimann, and the Fundación EDP Camerata, conducted by Paul Goodwin. He has also performed within the Banco Sabadell Young Talents at Auditorio Sony and within World Heritage Cities series in Mérida. In 2021 she participated in the 30th anniversary tour of the School with the Freixenet Symphony Orchestra, conducted by Andrés Orozco-Estrada, with whom she performed at Madrid's Teatro Real, at Bratislava's Reduta Hall, at Budapest's Liszt Ferenc Academy and at Vienna's Musikverein.
She has been part of the Cosan Ensemble, the Fundación Mutua Madrileña String Consort and the Dvořák, Wanderer and Arriaga Banco de España Ensembles, as well as that of the KPMG Schubert Quintet, with whom she was awarded the Mention to the most outstanding chamber group in the category of groups with piano in 2021. As accordionist, she has also been part of the Piazzolla Ensemble. She is currenly a member of the Ambage Ensemble.