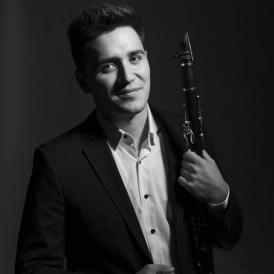 Born in Mota del Cuervo, Spain, in 1996. Since 2019, he studies at the Reina Sofía School of Music’s Clarinet Chair with professor Pascal Moraguès. He has been granted a scholarship by Fundación Albéniz.

At the age of 15 he entered the Professional Conservatory of Campo de Criptana-Alcazar de San Juan, where he graduated with Honours. He later furthered his studies at the Royal Conservatory of Music in Madrid (RCSMM) with Justo Sanz. In the 2017-2018 academic year he was selected to study, through the Erasmus programme, at the Liszt Academy in Budapest with Béla Kovacs. He has also attended masterclasses by Joan Enric Lluna, among others.

He has been awarded several prizes, including first prize at the International Clarinet Association Young Artist Competition in Belgium (2018).

As a student of the School, he has been part of the Sinfonietta, conducted by Baldur Brönnimann, and has performed at Segovia's Teatro Juan Bravo. He has also been a member of the Poulenc Ensemble and is currently part of the EY Ricercata Quintet and the Fundación Mutua Madrileña Ensemble.