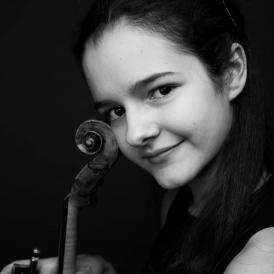 She started studying violin at the age of three. She later entered the Professional Conservatory in Majadahonda, where she graduated in 2016 with the Extraordinary Prize of the Comunidad de Madrid, as well as the Professional Artistic Education National Prize. Meanwhile, from 2011 to 2016, she studied with maestro Sergey Teslya.

She has also been awarded first prize in the following competitions: Violins for Peace (2013), City of Vigo (2015 and 2017), Madrid Intercentros Melómano (2015), Soloists of Madrid’s Symphony Orchestra’s Talents Project (2016 and 2017), City of Llíria (2017), and the Francesco Geminiani Prize (Italy, 2019). She has also won the second prize at the 25th Andrea Postacchini International Competition (Italy, 2018), the City of Xátiva (2016), as well as the Mention of Honour at the Intercentros Melómano National Competition (2017). In addition, between 2016 and 2019 she was awarded a scholarship by Young Musicians of Madrid to take musical improvement courses abroad.

She has performed as soloist with the Castilla y León Symphony Orchestra, conducted by Lucas Macías at the Miguel Delibes Auditorium in Valladolid; the Andrés Segovia Chamber Orchestra, conducted by Víctor Ambroa at the National Auditorium; Madrid’s Symphony Orchestra – Talents Project (four editions of the project) and the 430 Vigo Orchestra. She has also participated at the Santander Music and Academy Encounter, as well as in festivals including Ticino Musica (Switzerland), Allegro Vivo (Austria), and Lucca Classica (Italy).

As a student of the School, in 2018 she performed a duo with Anne-Sophie Mutter, along with the Viesgo Camerata at the Sony Auditorium. She has been part of the Wanderer Ensemble and the Freixenet Symphony Orchestra, conducted by Pablo González, Jaime Martín, Péter Eötvös and Pablo Heras-Casado and, as soloist, conducted by Jordi Francés, as well as that of the Fundación EDP Camerata under the baton of Paul Goodwin. She has also performed within the World Heritage Cities series in Alcalá de Henares and Ávila. In 2021 she participated in the 30th anniversary tour of the School with the Freixenet Symphony Orchestra, conducted by Andrés Orozco-Estrada, with whom she performed at Madrid's Teatro Real, at Bratislava's Reduta Hall, at Budapest's Liszt Ferenc Academy and at Vienna's Musikverein. She is currently a member of the Asisa Óscar Esplá Quartet, with whom she was awarded in 2019 the EMCY Prize at the 94th Young Musicians of Spain Chamber Competition.