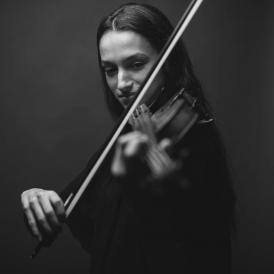 Born in Madrid, Spain, in 2002. Since 2017, she studies at the Reina Sofía School of Music’s Telefónica Violin Chair with professor Marco Rizzi. She has been granted scholarships by Consejería de Ciencia, Universidades e Innovación de la Comunidad de Madrid and Fundación Albéniz. She plays a Baroque violin bow loaned as an instrument scholarship by Sielam.

From 2005 to 2016 she studied at the CEDAM with Sergio Castro. She has attended several summer courses, including Pirineos Classic, Pirineos Junior, London Suzuki Group Summer School, Forum Musikae, and Astona International Summer Music Academy with professors such as Nicolás Chumachenco and Robert Roze, among others. She has also attended masterclasses by Cristoph Poppen, Miriam Freid, Silvia Marcovici, Giovanni Guzzo, Linus Roth, Asier Polo, Ralf Gothóni (groups with piano) and Oliver Wille (string groups) at the Reina Sofía School of Music. She has been awarded first prize at the 4th Young Performers Competition in Colmenar Viejo (2011), at the 5th Young Performers Competition in Tres Cantos (2012), and in the string section, B modality, at the 25th Young Performers National Competition in Villena (Alicante, 2015). In 2016 she was selected to take part in the public concert gala within the Astona International Summer Academy. She has been concertmaster of the JORCAM Camerata, with whom she performed at the National Auditorium.

As a student of the School, she has been part of the Freixenet Symphony Orchestra conducted by Plácido Domingo, Andrés Orozco-Estrada, Víctor Pablo Pérez, Pablo González and David Afkham, as well as that of the Fundación EDP Camerata under the baton of Giovanni Guzzo and Paul Goodwin. In 2021 she participated in the 30th anniversary tour of the School with the Freixenet Symphony Orchestra, conducted by Andrés Orozco-Estrada, with whom she performed at Madrid's Teatro Real, at Bratislava's Reduta Hall, at Budapest's Liszt Ferenc Academy and at Vienna's Musikverein. She has also been a member of the Dvořák Trio, the Casa de la Moneda Scarlatti and the Vivaldi Estaciones ensembles, the Puertos del Estado Haendel Quartet and the Amati Trio. She is currently part of the Bain Satie Ensemble and Ravel Duo.