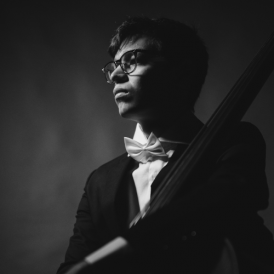 Born in Aragua, Venezuela, in 1999. Since 2020, he studies at the Reina Sofía School of Music’s Unidad Editorial Double Bass Chair with professor Duncan McTier. He has been granted scholarships by MAEC/AECID and Fundación Albéniz.

He has participated as soloist in the first Double Bass Festival of the State (Venezuela), performing Johann Baptist Vanhal’s double bass concerto, and as a guest soloist with the Aragua Symphony Orchestra. He has also made his debut as soloist with several orchestras in the country.

As a student of the School, he has been a member of the Freixenet Symphony Orchestra, conducted by Pablo Heras-Casado, and has performed within the World Heritage Cities series in Salamanca. He is currently part of the Unidad Editorial Bottesini Double Bass Quintet and the Barroco Ensemble.