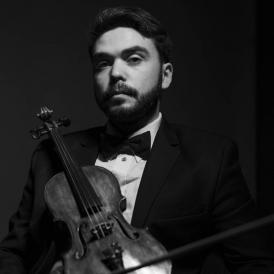 Born in Kherson, Ukraine, in 1994. Since 2019, he studies at the Reina Sofía School of Music’s Telefónica Violin Chair with professor Zakhar Bron. He has been granted a scholarship by Fundación Albéniz.

He began playing the violin at the age of four. In 2010 he entered the Mykola Lysenko School of Music in Kiev and in 2012 he was admitted to the Tchaikovsky National Academy of Music in Ukraine (class Shott S.), where he completed his graduate studies. He has also attended masterclasses by Ingolf Turban, Silvia Marcovici, Giovanni Guzzo, Christoph Poppen and Linus Roth.

He has performed with the Gileya Chamber Orchestra (Kherson, Ukraine) for a few years. Since 2016, he performs as soloist with the Kyiv-Classic Orchestra.

As a student of the School, he has been part of the Freixenet Symphony Orchestra, conducted by Pablo González and David Afkham, and that of the Fundación EDP Camerata, conducted by Giovanni Guzzo. He has also been a member of the Google Da Vinci Ensemble and of the BP Mendelssohn Quartet.
He plays a Joseph Klotz “mon Senior” violin from 1807.