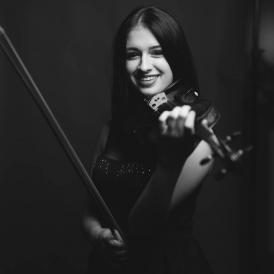 Born in Legnica, Poland, in 1999. Since 2017, she studies at the Reina Sofía School of Music’s Telefónica Violin Chair with professor Zakhar Bron. She has been granted scholarships by Isabelle d’Ornano / Laetitia d´Ornano scholarship and Fundación Albéniz.

She started her violin training at the age of 7 under the guidance of her parents, Konrad and Alicja Dragan. Afterwards, she studied at the music school in her hometown and at the Zakhar Bron Academy in Interlaken (Switzerland). She has also attended masterclasses by Jadwiga Kaliszewska, Bartosz Bryla, Natalia Prishepenko, Miriam Fried, and Ana Chumachenco.

She has been awarded in several international violin competitions: first prize in Novosibirsk (Russia, 2019), Teleman Competition in Poznan (Poland, 2017), and the first prize ex aequo at the XIV Lipinski-Wieniawski in Lublin (Poland, 2018).

She made her US debut at Carnegie Hall in New York when she was only 15 years old. She has performed as a soloist with Wroclaw, Lublin, Sudeten, Opole, and Lower Silesia philharmonic orchestras, as well as Uzbekistan and Legnica symphony orchestras. She has also performed in music halls such as the Berlin Philharmonie, the Rachmaninov Hall of Tchaikovsky Conservatory in Moscow, the Marcel Landowski Auditorium of the Paris Conservatoire, and the Krzysztof Penderecki European Centre for Music in Luslawice. In addition, she has played in festivals such as Schleswig-Holstein or the Mozarteum Summer Academy in Salzburg.

As a student of the School, she has been a member of the Freixenet Symphony Orchestra, conducted by Plácido Domingo, Víctor Pablo Pérez, Andrés Orozco-Estrada, and András Schiff, and that of the Sinfonietta under the baton of Baldur Brönnimann. She has also been part of the Google Da Vinci Ensemble and is currently part of the Areti Duo.