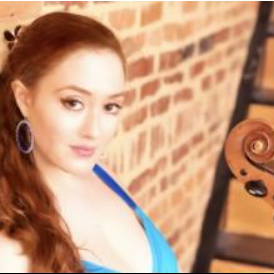 Born in Philadelphia (USA) in 1991. She earned her Bachelor of Music degree from the Peabody Conservatory, where she was the recipient of the Beatrice Feldman Kahn and Raymond S. Kahn scholarship. She completed her bachelor studies at the Johns Hopkins University in Baltimore and graduated from the Conservatorium van Amsterdam in the Netherlands. She later completer her master’s degree at the Koninklijk Conservatorium Brussel in Belgium in 2020, where she graduated cum laude and is currently enrolled as a Post Graduate student. She has performed in United States, Europe and Asia, as soloist and in ensembles such as the Residentie Orkest and the Rotterdam Philharmonic Orchestra (Netherlands). Sara's playing has been broadcast on TVR Romania, Deutschlandfunk Kultur, Radio Romania, NPO Radio 4 Nederland, NPR (USA), and Bruzz FM (Belgium). Her main mentors include Lorne Munroe, Ohad Bar-David, Derek Barnes, David Hardy, and Jeroen Reuling.