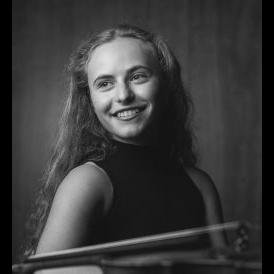 Born in Madrid, Spain, in 1999. Since 2017, she studies at the Reina Sofía School of Music’s Telefónica Violin Chair, first with professor Marco Rizzi and currently with professor Christoph Poppen. She has been granted scholarships by Consejería de Educación, Universidades y Ciencia de la Comunidad de Madrid and Fundación Albéniz. She plays a SIELAM baroque violin bow, loaned as an instrument scholarship by Fundación Albéniz.

She studied the elementary degree at the Santa Cecilia Academy with Emilio Maravella and the professional degree at the Adolfo Salazar Conservatory with Anna Baget. She continued her training at the Katarina Gurska School of Music with Sergey Teslya, and has attended masterclasses by Mariana Todorova, Mari Tampere, Vera Martínez-Mehner, Keiko Wataya, Manuel Guillén, Agustín León Ara, Oliver Wille, and Silvia Marcovici, as well as by Christoph Poppen, Miriam Fried, and Torleif Thedéen, Giovanni Guzzo, Linus Roth, Ana Chumachenco, and Ralf Gothóni (groups with piano). She has been awarded in several national and international competitions (Pozuelo de Alarcón in 2013; City of Xàtiva Young Performers, Marie Cantagrill and Llanes in 2014; Cuenca’s Young Performers in 2015. She has also won the “Clásicos y Reverentes” TV show, which led her to represent Spain at the 2018 Eurovision Young Musicians. She has performed in renowned venues as soloist and in chamber ensembles such as the philharmonic orchestras of Gijón, Avilés and Oviedo in Ciudad Real and Madrid, as well as the 32nd Clásicos en Verano Festival, among others. In 2016 she was a member of the Verbier Festival Junior Orchestra (Switzerland).

As a student of the School, she has been part of the Freixenet Symphony Orchestra, conducted by Jaime Martín, Víctor Pablo Pérez, Plácido Domingo, Péter Eötvös, Andrés Orozco-Estrada, Sir András Schiff, Pablo González and Pablo Heras-Casado and that of the Fundación ED Camerata under the baton of Anne-Sophie Mutter. In 2021 she participated in the 30th anniversary tour of the School with the Freixenet Symphony Orchestra, conducted by Andrés Orozco-Estrada, with whom she performed at Madrid's Teatro Real, at Bratislava's Reduta Hall, at Budapest's Liszt Ferenc Academy and at Vienna's Musikverein. She has also been a member of the Bartók Duo, the Casa de la Moneda Scarlatti Ensemble, and the Puertos del Estado Haendel Quartet. She is currently part of the Banco de España Arriaga Ensemble.