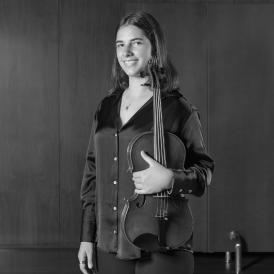 Born in Florence, Italy, in 2003. Since 2022, she studies at the Reina Sofía School of Music’s Fundación BBVA Viola Chair with professor Nobuko Imai. She has been granted scholarships by Claudio Aguirre and Fundación Albéniz.

Although she began her musical education studying violin at the age of four, in 2016 she chose to play viola, taught by Antonello Farulli, with whom she is currently in her third year. Since 2020, she takes part in the advanced course given by Bruno Giuranna at the Stauffer Centre for Strings in Cremona. She has also received masterclasses by Nobuko Imai, Wenting Kang, Lawrence Power, Heime Müller, Thomas Selditz, Yibin Li, Christophe Giovaninetti, Paul Cortese, and Cuarteto Casals.

She was awarded the Fiesole School of Music scholarships as viola soloist for several years.

As chamber musician, she is a member of the Kaleidos Quartet that was awarded first prize at the Airola City International Competition.