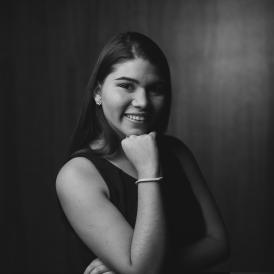 Born in San Fernando de Apure, Venezuela, in 1999. Since 2017, she studies at the Reina Sofía School of Music’s Flute Chair with professor Jacques Zoon. She has been granted a scholarship by Fundación Albéniz. In 2020 she received the Diploma to the most outstanding student of her chair.

She has been part of the Symphony and Regional Orchestras of Apure as a main flutist, with whom she has performed as soloist under the baton of maestros Carlos Garcia Guerra, Luis Fernando Ruiz Bayona and Nicolás Real. She has also been conducted by Christian Vasquez, Andrés González, Cesar Iván Lara, Pablo Castellanos, Alfredo Rugeles, and Gregory Carreño. Additionally, she has been a member of the Centro-Llano-Occidental Symphony Orchestra in 2012 and that of the National Children Symphony Orchestra in 2013/2014 as main flutist, with whom she represented Venezuela in the International Music Festival in Salzburg, under the baton of Sir Simon Rattle. She has also performed as flautist within the Teresa Carreño Symphony Orchestra. In 2015 she performed with the Siegfried Idyll Chamber Orchestra at the Lincoln Center in New York, under the baton of Gustavo Dudamel. In 2016 she was awarded second prize at the 2nd National Flute Competition in Venezuela, which led her to perform as soloist with the City of Caracas Symphony Orchestra in the Humboldt Cultural Association. In 2019 she won the Renzo Giubergia Award (Italy) and in 2020 the second prize at the 19th Intercentros Melómano Competition.

As a student of the School, she has been part of the Freixenet Symphony Orchestra, conducted by Péter Eötvös, Jaime Martín and Pablo Heras-Casado, as well as part of the Sinfonietta with Johannes Kalitzke, and that of the Viesgo Camerata under the baton of Anne-Sophie Mutter, with whom she performed as soloist conducted by Hansjörg Schellenberger. In 2021 she participated in the 30th anniversary tour of the School with the Freixenet Symphony Orchestra, conducted by Andrés Orozco-Estrada, with whom she performed at Madrid's Teatro Real, at Bratislava's Reduta Hall, at Budapest's Liszt Ferenc Academy and at Vienna's Musikverein. She has also been a member of the Harmonie Ensemble and the Bozza Quartet. She is currently part of the EY Ricercata Quintet and of the Saint-Saëns Ensemble.