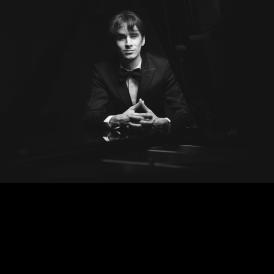 Born in Buenos Aires, Argentina, in 1992. Since 2017, he studies at the Reina Sofía School of Music’s Fundación Banco Santander Piano Chair, first with Professor Dmitri Bashkirov until 2021 and with professor Milana Chernyavska since the 2021-2022 academic year. He has currently been granted scholarships by AIE-Sociedad de Artistas, Intérpretes y Ejecutantes, Mónica Lavino Mariani and Fundación Albéniz. During his training at the School, Her Majesty Queen Sofía handed him in 2020 the Mention to the most outstanding chamber group in the piano category, as a member of the Deloitte Mozart Trio; in 2019 as part of the Contrastes Group; and in 2018 and 2022 the Mention to the most outstanding student of his chair.

Tomás began his musical studies at the age of eight and during his adolescence, at the recommendation of Martha Argerich, he received a scholarship to perfect himself with Nelson Goerner at the Haute École de Musique de Genève, Switzerland. From then on, the most important performances began: his appearance at the prestigious international stage of the Colón Theater as a soloist of Tchaikovsky's Concerto No. 1 and solo piano recitals at the Symphonic Hall of the National Auditorium and the Gran Rex Theater. During his studies in Switzerland he won the Gian Andrea Lodovici Prize, managing to record his first CD at the famous Fazioli Concert Hall for the German record label ARTS.

Since his public debut at the age of twelve as a soloist of Mozart's Concerto K. 415, Tomás has appeared on radio and television and his performances are recognized and published by the press in the main newspapers and magazines of his country. In his recent reappearance at the Colón Theater with Mozart's Concerto K. 414, the wide repercussion and the praise from the press described: “A direct expressiveness contoured with the subtlety of a goldsmith (...) Owner of an expressiveness that reveals the true essence of what he interprets”.

Among many awards, he has received the Honourable Mention at the XXXIII International Ferrol Piano Competition, Golden Medal at the IV Manhattan International Competition, Mónica Lavino Mariani International Award (II edition), 2nd Prize at the Muse Competition 2021, and he obtained, from the hands of Queen Sofía, the awards for the Most Outstanding Student and the Most Outstanding Chamber Group at the Reina Sofía School. With the Aurora Piano Quartet he is laureate at the Orpheus Swiss Chamber Music Competition 2016. In addition to being awarded in different competitions in his country such as First Prize at the XI Bienal Juvenil Shell Competition and First Prize at the 2010 Chopiniana Competition, he was honored by the Association of Music Performers and the Association of Music Critics.

As a student of the School, he has performed within the AIE en Ruta Clásicos series in Madrid, Mérida, León and Lugo. He has been part of the Contrastes Trio and Ensemble, Prosegur Albéniz and Piazzolla ensembles and as a guest pianist that of the Globo Ensemble. He is currently a member of the Deloitte Mozart Trio.

Since 2020 his recitals are broadcast on Eurochannel's Allegro HD for Latin America.