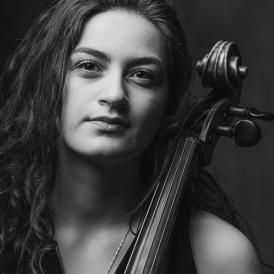 She began her cello studies in 2009 with Viacheslav Kaynov at the University of Çukurova’s State Conservatory and furthered her training with Dilbağ Tokay between 2013 and 2016 at the Istanbul State Conservatory of the Mimar Sinan University of Fine Arts and, until 2021, at the Hochschule für Musik Freiburg in Germany under the guidance of Jean Guihen Queyras.

Her artistic activity has led her to perform at the Big Bolgar Music Festival in Russia (2011) and the Iguazú En Concierto Festival with the Adana String Quartet (2013). She also gave a recital in İş Sanat during the Brilliant Young Artists concerto cycle (Parlayan Yıldızlar, 2014) and played at the Young Soloists concert cycle within the Pera International Music Festival.

She has been a member of the Doğuş Children Symphony Orchestra, the Saygun Camerata, and the AIMA Festival and Markgräfler Musikherbst Festival Orchestras. In 2018 she participated in the Britten Pears young artists programme as principal cello under the baton of Marin Alsop and gave concerts at the Snape Maltings Concert Hall. She has also performed as soloist with the Istanbul State Conservatory’s Orchestra, with Çukurova’s State Symphony Orchestra and with Olten Philamonie.

As a student of the School, she is a member of the Saint-Saëns and that of Casa de la Moneda Scarlatti ensembles.