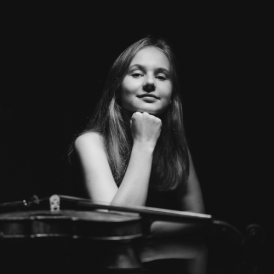 Born in Munich, Germany, in 1999. Since 2020, she studies at the Reina Sofía School of Music’s Telefónica Violin Chair with professor Marco Rizzi. She has been granted a scholarship by Fundación Albéniz.

Her performances with orchestra include her participation as first violin with the Odeon Jugendsinfonieorchester, as well as with the Bayerisches Landesjugendorchester. She has also performed with conductor Jonathan Nott at the Munich Philharmonic. As soloist, she has played within the Concert for Children series of the Munich Philharmonic, with Julia Fischer, and with the students’ orchestra of Munich’s Hochschule für Musik und Theater. Since 2016, she is granted the Yehudi Menuhin Live Music Now scholarship.

In 2019 she received several awards in Germany, including first prize at the Gerhard Voght International Chamber Music Competition and third prize at the August Everding Competition for Violin.

As a student of the School, she has been part of the Freixenet Symphony Orchestra, conducted by Pablo Heras-Casado, and that of the Fundación EDP Camerata under the baton of Giovanni Guzzo. She has also performed within the World Heritage Cities series in Santiago de Compostela. In 2021 she participated in the 30th anniversary tour of the School with the Freixenet Symphony Orchestra, conducted by Andrés Orozco-Estrada, with whom she performed at Madrid's Teatro Real, at Bratislava's Reduta Hall, at Budapest's Liszt Ferenc Academy and at Vienna's Musikverein. She is currently a member of the Prosegur Albéniz Quartet and Ensemble, with whom she was awarded the Mention to the most outstanding chamber group in the category of string quartets in 2021.