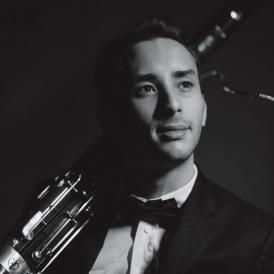 Born in Estado Miranda, Venezuela, in 1999. Since 2018, he studies at the Reina Sofía School of Music’s Bassoon Chair with professor Gustavo Núñez. He has been granted scholarships by Juan Carlos Escotet Rodríguez (ABANCA) and Fundación Albéniz. He plays a B. Bell bassoon loaned as an instrument scholarship by the latter.

He began his music education at Venezuela’s National System of Youth Orchestras and Choirs. In 2012 he entered the Simón Bolívar Conservatory of Music and the Latin American Academy of Bassoon with Omar Ascanio. He has attended masterclasses by Henning Trog, George Sakakeeny, Dag Jensen (during the Santander Encounter of Music and Academy), Matthew Wilkie, and Joan Enric Lluna.

He has been part of the Youth and Children’s national symphony orchestras of the Teresa Carreño and Simón Bolívar, with whom he has performed Carl Maria von Weber’s Concerto for bassoon and orchestra in F major, the Andante e rondo ongarese, as well as concerts of Hummel and Mozart. He has toured several countries, including Japan (Tokyo), China (Beijing and Shanghai), Mexico (City of Mexico) and Austria (Salzburg Festival, 2013).

As a student of the School, he has been a member of the Freixenet Symphony Orchestra, conducted by Andrés Orozco-Estrada, Víctor Pablo Pérez, Plácido Domingo, Péter Eötvös, Pablo González and Pablo Heras-Casado, and he has been part of the Sinfonietta under the baton of Johannes Kalitzke. He has also performed within the World Heritage Cities series in Salamanca. He has also been part of the Bozza Quartet, the EY Ricercata Quintet, the Strauss Trio, and the O Globo and Gounod ensembles. He is currently a member of the Fundación Mutua Madrileña and Cosan ensembles.