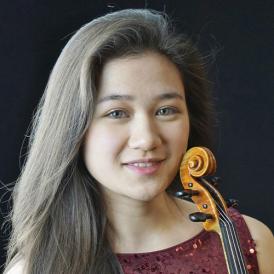 Born in Chongqing, China, in 1999. She studied violin at the University of Music and Performing Arts of Mannheim, as well as at the Universität der Künste in Berlin with professors Susanne Rabenschlag and Nora Chastain, respectively. She has been awarded several prizes at the Jugend Musiziert Competition, as well as a first prize at the 34 Karel Kunc Music Competition. She has performed as soloist with Symphony of the Lucie Kölsch Worms Music School, the Junge Philharmonie Neckartal Odenwald, the Bad Dürkheim Chamber Orchestra, the Bundesjugendorchester, and in 2021, she was concertmaster of the Neue Philharmonie München concerts. During her training, she has received the support of the Amadé network of the Hochschule für Musik Mannheim and was one of the scholars of the Zukunftsinitiative Rheinland-Pfalz e.V. 2019 initiative.