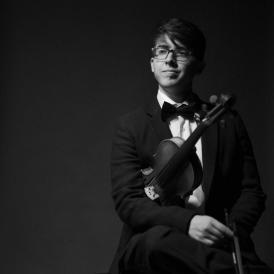 Born in Maracaibo, Venezuela, in 1998. Since 2019, he studies at the Reina Sofía School of Music’s Telefónica Violin Chair with Professor Marco Rizzi. He has been granted scholarships by Juan Carlos Escotet Rodríguez (ABANCA) and Fundación Albéniz and plays a German violin from the early 20th century loaned as instrument scholarship by Gunilla Ekelund.

He studied with Ivette Ferreira at the José Luis Paz Conservatory, as well as with José Francisco del Castillo at the Latin American Academy of Violin. He completed a degree in music at the Universidad Católica Cecilio Acosta, where he also developed his abilities as arranger. He has also attended masterclasses by Silvia Marcovici and Luis Fernando Pérez. He has also attended masterclasses by Silvia Marcovici, Christoph Poppen, Linus Roth, Asier Polo, Luis Fernando Pérez, Ralf Gothóni (groups with piano), Oliver Wille, and Helena Poggio (string ensembles).

In 2015 he was awarded first prize at the Juan Bautista Plaza National Violin Competition in Venezuela, which led him to participate as soloist in a tour around China, Japan, Netherlands, and Russia. He has also taken part in the Venezuelan National Orchestra, conducted by Gustavo Dudamel, with whom he performed during the Nobel Prize ceremony held in Stockholm (Sweden).

As a student of the School, he has been part of the Freixenet Symphony Orchestra, conducted by Pablo González and Pablo Heras-Casado, that of the Sinfonietta under the baton of Baldur Brönnimann and the Fundación EDP Camerata, conducted by Giovanni Guzzo. He has been a member of the Casa de la Moneda Scarlatti Ensemble and is currently part of the Ramales Quartet.